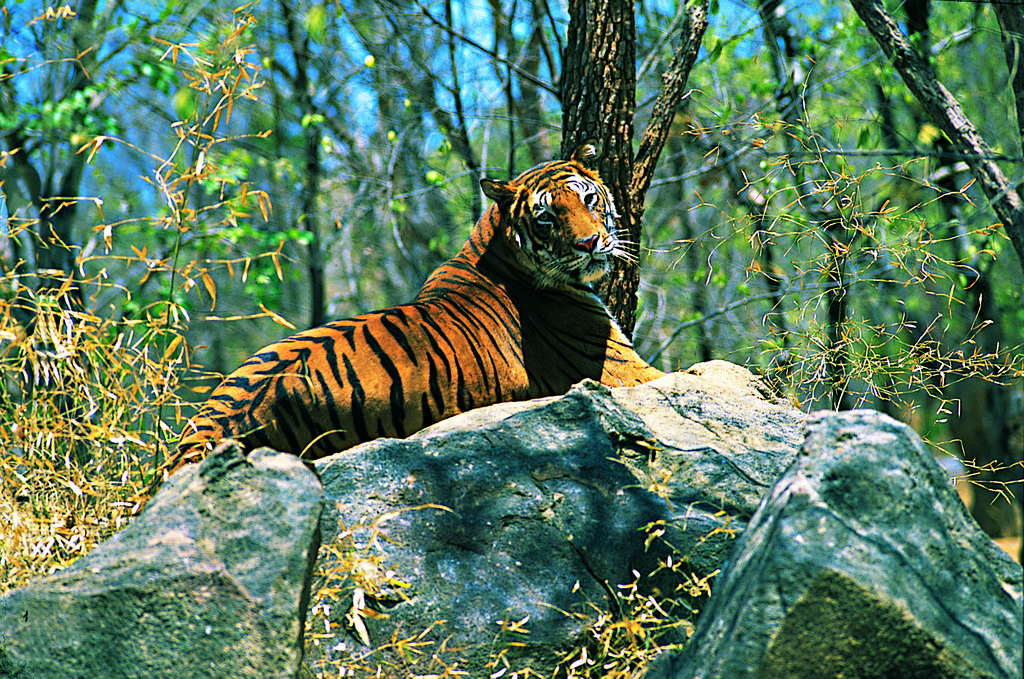 India as a country has not only been diverse in maintaining in cure but also in maintaining its biodiversity. With projects to protect the wild endangered animals, India has many projects on National park which I have listed below;

This park is name after the famous Corbett and was one of the first national parks to be opened. They run special programs to safe the endangered species of Royal Bengal tigers and the great Indian elephants. The best time to visit is between Nov to June and March to May. This place offers Open jeep safari, Elephant safari for a first- hand experience with the animals.

Settled on the foothills of Vindhyachal Mountains, this national park has the highest density of tigers along with white tiger sometimes. This park has a wide variety of species and activities like Open jeep safari, night safari and a visit to Bandhavgarh Fort can be done.

This is one of the biggest national parks near Sawai, Madhopur, Rajasthan. And is a home to the Royal Bengal tiger, Nilgai, leopard, black bucks etc. The best time to visit this place is between March to May and October to June.

Gir forests are a home to the largest population of Asiatic lions living in their natural habitat along with rare to see birds making it a hot favorite with many natural enthusiasts. Safari is a must do here to see the Asiatic lions in their territory.

This national park is a UNESCO world heritage site and is nestled in the North east corridor on the floodplains of the Brahmaputra and consists of forests and wetlands. This park boasts of having the highest population of one- horned rhinoceros in the world and Ganges river Dolphins which is a truly rare sight. Stay can be arranged on the spectacular tree house giving you a glimpse of the nearby area below.

Kanha is one of the top national parks in India and consists of the most diverse variety of species and Flora and Fauna. It is a home to the Royal Bengal tigers, Panthers, sambar, black buck, jackal and a variety of other species. This park truly owns a place as it’s supporting one of the greatest number of animals in their natural habitat.

Located on the Western Ghats in Kerala, this is one of the most picturesque national parks amongst all. The highlight here being the Periyar lake where the lake safari can be done to spot rare animals inside the park. Best time to visit is between September to November. Activities include boat safari, jeep safari and stay inside the Jungle packages.

This is a unique UNESCO world heritage site, located on the river Delta which is a home to rare Royal Bengal Tigers, and salt water crocodiles. One spotlight are the eerie mangroves of the Sundari tress who roots stay afloat.  Best time to visit are from October to April

This park is located on the borders of Madhya Pradesh and Maharashtra and is a home to rare species of birds and an endangered species of vultures. This park contains equally diverse fauna with rare plant species too.

Best time to visit is between October to June. Activities like bird watch and boat rides to its nearby islands are some of the things people look forward to.

Bandipur national park is a part of the Nilgiri Biosphere reserve and is now a sanctuary for tigers. This has one of the highest species of tigers along with varying species of gaur, sambar, langurs and black-knapped hare etc.